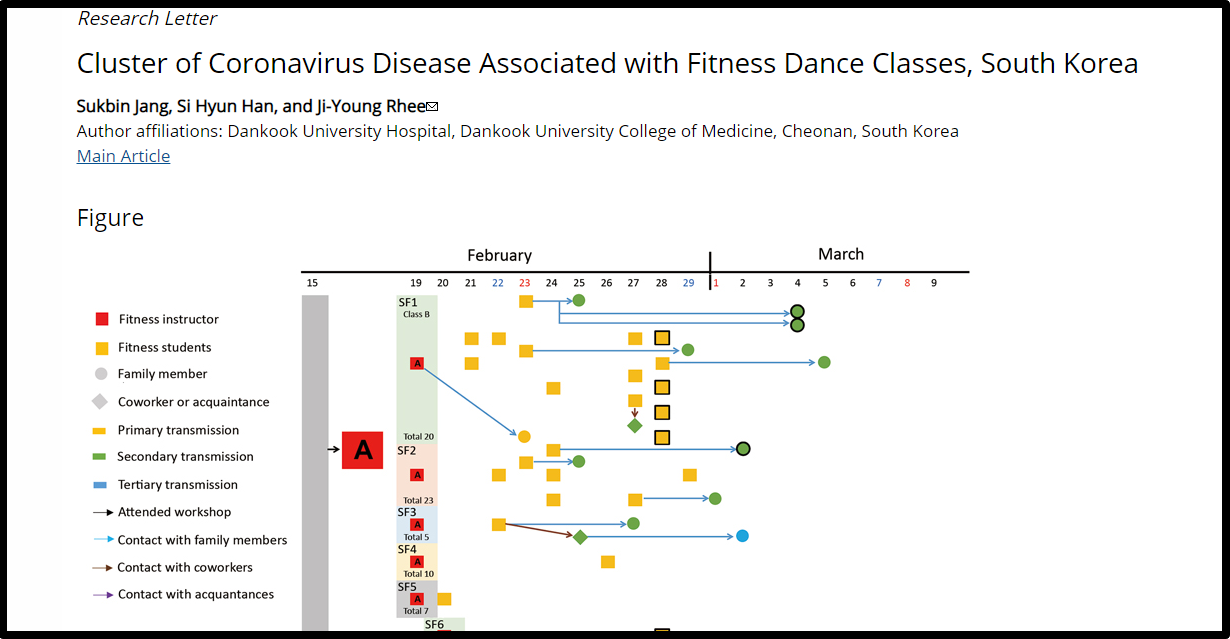 I’m active in both the fitness and Aikido communities, and have recently been reading/listening attentively to discussions about if/when, and how, to reopen gyms and dojos. Opinions range from “Open everything, and if people don’t like it they can stay away,” to “Not until there’s robust contact tracing and isolation, and/or solid treatments or vaccines.” So when I saw the above article being passed around about COVID-19 being spread through group fitness classes I thought it was important to give it a close look.

A cluster developed and was discovered

One of the instructors, who’d come from a nearby area with lot of cases, Daegu, “had symptoms develop on February 18 [three days later] and might have been presymptomatic during the workshop.”

Here’s how the connection was made between the instructors’ workshop and cases that were discovered later (emphasis added to the quoted text):

“On February 25, a COVID-19 case was detected in Cheonan, a city ≈200 km from Daegu. In response, public health and government officials from Cheonan and South Chungcheong Province activated the emergency response system. We began active surveillance and focused on identifying possible COVID-19 cases and contacts. We interviewed consecutive confirmed cases and found all had participated in a fitness dance class. We traced contacts back to a nationwide fitness dance instructor workshop that was held on February 15 in Cheonan.”

As a result of that contact tracing, which started after February 25, instructors from the workshop were tested. Eight of those 27 instructors tested positive.

“By March 9, we identified 112 COVID-19 cases associated with fitness dance classes in 12 different sports facilities in Cheonan.” This group now includes students in the gyms those instructors went home to after the workshop.

Note that the “if they are afraid they don’t have to go” approach didn’t help the 34% who caught it from a family member of an instructor or student.

What this can mean for us, individually

It’s easy to imagine feeling like “I might be coming down with something,” or having a little cough. “It’s probably just allergies.” It’s easy to imagine a fitness pro or Aikido instructor, “with very mild symptoms,” brushing it off and leading class anyway. We each have to guard against this, personally, whether we are instructors or students. Get really good at saying “I’m sure it’s nothing, but I’m going to stay away from classes for a few days.” And then get tested before returning.

This is the martial artist’s radical personal integrity I discussed in my post from March 7 2020, Don’t panic. Do Act. — Aikido in a world with COVID-19.

Some important things to know about these fitness classes

These conditions are pretty much what we have in Aikido classes. 60 square meters is just under 650 square feet — a little bigger than a 20′ x 30′ mat, or about 36 tatami. Five to 22 students, engaging in intense exercise for about an hour.

Fitness dance is a solo activity (not dancing with a partner). In my experience, participants are typically at least 6′ apart anyway. But this was before measures like purposefully distancing, and before wearing masks.

This is a very small “sample size,” if you could even call it that, but it’s interesting:

“We did not identify cases among classes with <5 participants in the same space. Of note, instructor C taught Pilates and yoga for classes of 7–8 students in the same facility at the same time as instructor B (Figure; Appendix Table 2), but none of her students tested positive for the virus. We hypothesize that the lower intensity of Pilates and yoga did not cause the same transmission effects as those of the more intense fitness dance classes.”

Rosters can help with contact tracing and isolation of infected people

“A limitation of our study is the unavailability of a complete roster of visitors to the sports facilities, which might have meant we missed infections among students during surveillance and investigation efforts. Discovery of outbreak cases centered on exercise facilities led to a survey of instructors who participated in a fitness dance workshop and provided clues to identifying additional cases among students.”

There may be more cases than just the 112 discovered by this public health effort, since tracing was done by memory and interviews.

Who caught COVID-19 in these fitness classes?

Note that these were relatively young people, and healthy enough to be participating in high-energy fitness dance classes. According to the details in the appendix the age range was 31-52 years, so mostly in their 30s and 40s.

Fewer than 20% had preexisting conditions. So if you’ve been thinking that only old, sick people are at risk, think again.

What happened to these 54 students who got sick?

In most reporting the focus has been on death rates. Nobody died in this group (as far as I can tell). But, these relatively young, healthy folks were sick and/or in quarantine for 13 to 66 days, with the median being about 27 days. 17 of them had pneumonia. That’s a big impact on their health, their families, their work, and their finances. And these are just the 54 students – this doesn’t include the rest of the 112 people who caught COVID-19 as part of this outbreak, or possibly others missed in the contact tracing process.

Some final points to consider

A single workshop, seminar, or camp can lead to spread through many facilities. The workshop in this situation was only 4 hours, with just 27 participants. It lead to (at least) 112 people associated with 12 facilities contracting COVID-19. In my humble and non-professional opinion we should be training only in our own dojo or gym. No in-person workshops or seminars should be bringing people from different facilities together until this is well under control.

People with no symptoms can spread the virus. Yes, “if you’re stick, stay home” is valid advice. Yes, checking temperatures is better than not checking, especially for kids’ classes. But many infected people (most, in this case) don’t have a fever. Neither of those approaches will ensure that people (including you) are OK.

The people most willing to show up for classes will also be the people who are most likely to be out doing other things that could expose them to the coronavirus. The most cautious people will be staying away, at least at first.

The Letter suggests, “Characteristics that might have led to transmission from the instructors in Cheonan include large class sizes, small spaces, and intensity of the workouts. The moist, warm atmosphere in a sports facility coupled with turbulent air flow generated by intense physical exercise can cause more dense transmission of isolated droplets”

The Letter advises, “Because of the increased possibility of infection through droplets, vigorous exercise in closely confined spaces should be avoided during the current outbreak, as should public gatherings, even in small groups.”

Finally, testing and contact tracing are crucial. “Just saying home for a few days until you feel better” is insufficient. According to the Letter, “Discovery of outbreak cases centered on exercise facilities led to a survey of instructors who participated in a fitness dance workshop and provided clues to identifying additional cases among students. Early identification of asymptomatic persons with RT-PCR–confirmed infections helped block further transmissions.“