There is a significant international 10-day event in the Aikido world, happening from Friday, May 12th, and happening daily through Sunday, May 21st: “Aikido at the Leading Edge.” It’s open to anyone – Aikido practitioners, or folks just curious about the art and its applications in the world. I’m part of the street team helping to spread the word*, and I hope you’ll participate in some (or all!) of the sessions. I’m pulling together a bunch in info here, so it’s all in one place.

“Aikido at the Leading Edge” is an online video conference event with two to five  (mostly four) 90-minute sessions each day. It features over 40 teachers in keynotes, interviews, panel discussions, and workshops. You can see the complete schedule about halfway down the event page. Don’t worry if you’ve missed some of it – once you sign up you can go back and watch those sessions at any time during the 10-day event, so it’s not too late!

You can pick and choose.

If there are just a couple of subjects of interest, that’s fine. It’s FREE, for heaven’s sake! And if you can’t make the session times you can still watch them afterward, also FREE, during the 10 days of the event. Nothing like this – of this scope – has never happened before, and who knows if it ever will again. There will be Q&A opportunities with the speakers, and breakouts where you’ll discuss and explore in small groups of people from around the world. It’s a natural and fun way to meet with others around the globe.

The tele-summit is being led by Miles Kessler Sensei, a leader in the Aikido community who many of us at Aikido of San Diego have trained with in various seminars, including our Evolutionary Aikido retreats at Joshua Tree. The 40+ teachers are an international who’s who of Aikido from a variety of lineages and perspectives. The line-up includes my own teacher, Dave Goldberg Sensei, plus a few teachers in other arts. There are authors, people who bring Aikido principles into business, education, and other areas, some who specialize in embodiment, psychiatrists and psychologists, video and documentary producers, etc. Richard Strozzi-Heckler, Wendy Palmer, Christian Tissier, Robert Frager, Mark Walsh, John Stevens (yes, the one who translated “The Art of Peace,” that little book everyone has), Kayla Feder, Richard Moon, Roy Dean, Teja Bell… You can see the complete list of presenters at the event page, and click each of their photos to see their own websites and bios. (I just discovered that cool feature a moment ago!)

Many of the sessions cover topics of interest to anyone – not just Aikido practitioners – about work, community, relationship, etc., plus some interesting philosophical explorations. I think the workshop on “Stress and Peacemaking” with Paul Linden Sensei could be valuable to anyone.  There will be keynotes, panel discussions, interviews, and workshops. I hope people of all persuasions – not just martial arts people – will join in.

Each session is about 90-minutes long, including the speakers, breakout sessions, and Q&A. I’ve intentionally left off the times, as things may change. Please refer to the event website for the up-to-date schedule.

Panel Discussion: “Spitting Out The Bones – On A Post-Japanese Aikido Culture” | w/ Teja “Fudomyo” Bell, Richard Moon, Patrick Cassidy, & Miles Kessler
Panel Discussion: “The Uke/Nage Relationship: Why We Need Each Other To Evolve” – Dr. Dirk Muller, Judith Elza, Sonja Sauer, Miles Kessler
Interview – Linda Holiday Sensei | “Journey To The Heart Of Aikido”
Workshop: Paul Linden – “Stress and Peacemaking” << If you don’t want to do everything, at least do this one!

The event uses the Zoom teleconference system, which is available (FREE) for Mac, PC, iOS, and Android. It’s easy and works very smoothly. Kessler Sensei and his team have led many international workshops and seminars, and have it down to an art. If you don’t want to be on camera that’s OK. Either shut your camera off or aim it at a bouquet of flowers or something. :-)

You can sign up for “Aikido at the Leading Edge here, FREE. It only requires your first name and email address

I will be participating in as many sessions as I can. Hope I’ll see you there!

*Full disclosure: The links in the article are affiliate links. I may receive some benefit for my helping to get the word out. But that’s not why I’m sharing about this. A similar, but much more modest, effort was a big part of my decision to start practicing Aikido, and continues to influence my understanding of the art today. If you dislike affiliate programs, please use this direct link to Aikido at the Leading Edge, and I won’t get credit. I’d rather you just participate, no matter how you get there.

Before I started training, when I was exploring whether I actually wanted to do Aikido or not, I listened to a podcast by Jeff Davidson where he interviewed Robert Nadeau, David Shaner, Ellis Amdur, George Ledyard, Kevin Blok, Jon Cameron, and I think a couple of others, A pretty wide range of perspectives. I learned of Systema from Ledyard Sensei, and considered going with that instead. I listened to each of the episodes at least a dozen times. They collectively helped me better understand the range of Aikido in the world, and in fact that there is a broader Aikido world. What Nadeau said, especially, really connected with me. When I went to check out dojos the first one I visited, Aikido of San Diego, had a flyer, a seminar with Nadeau coming up, and I stopped looking right then. I’d found my dojo home, and my teacher, and my whole life changed for the better.

So I’m really looking forward to this. There were only 9 episodes of that podcast years ago, and they aren’t available any more. I feel like this project will be like 25-30 new episodes, but more in-depth, on video, and with active participation. I’m gonna be like a kid in a candy store!

Wow. Here we are again. Another year. Time seems to fly. I must be having fun.

I have been training consistently, as always. On the mat 6 days a week, most weeks, and participating in as many seminars as I can manage. 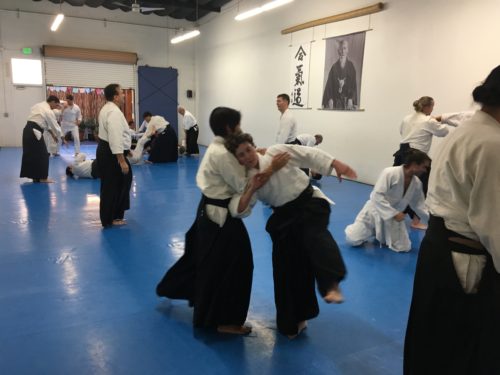 Teaching has been coming up more and more. I enjoy it, and always learn a lot. Teaching will keep you humble about your skills and knowledge, for sure! I am in the rotation for Saturday morning’s class. Sometimes I lead an evening class if a regular instructor can’t be there, too. Saturday is 90 minutes, so we can develop a theme or progression more fully. I start out with long, slow warm-ups. I don’t know about you, but my body is not ready to move first thing in the morning. We usually do some weapons work, too. Saturdays are especially interesting because the mix of students usually includes yudansha who are senior to me, some of whom come from different lineages, a mix of ages from children to seniors, and often a new student or two. A class that keeps them all engaged is challenging! Now I have a little girl regularly asking me to help her with her 31 jo kata. How cool is that?

Last month a dojo mate organized a trip across the border to train with friends there, and the Sensei asked me to teach next time we visit. I’m looking forward to that. Such a nice group of students! During my road trip to the “O Sensei Revisited” retreat two weeks ago I had the opportunity to visit another dojo (more on that later), where they handed the class off to me for the last 30 minutes. Acck! Note to self: Always have a few lesson plans in the back of your head. You never know when you’ll be asked to lead a class!

Teaching the children’s classes when Sensei is away now feels natural and comfortable. I even had one class recently where the kids were so into the training that they forgot to ask if we could play a game. Kids were smiling and laughing, and parents were taking videos. I rate the success of my kids classes starting out with “no injuries and no tears” as a baseline. Smiling, laughing, forgetting to ask to play a game, and parents taking videos is my highest success score so far.

It’s interesting feeling like a beginner with two left feet, always questioning what I know and refining my understanding, and at the same time standing in front of a class and owning what I say and show. There’s something yin-yang about that, I suppose. A couple of years ago I could claim newly-minted shodan status, and excuse myself for blundering a bit. Now I’m more comfortable leading, while at the same time being more curious than ever about discovering new details and depth in the art.

I (obviously) haven’t been writing as much as I’d like, or doing much fitness coaching either. In a stroke of random luck I fell into the perfect paying gig. It’s good work for a great organization, but it does keep me busy. Doing some thinking on prioritizing things to make room for writing and coaching again, as those things are really important to me, and are my longer-term career. But income is important, too. Alas.

Sensei is offering mindfulness training at the dojo, and I’ve been taking advantage of that. It’s a new exploration, and I’m just seeing where it leads. I have also been making time for some strength and mobility training, at least. That’s fun, and makes everything else go better, too.

Sensei let me know that I should expect to test for nidan (second-degree black belt) later this year. Right now I’m “living in the question” about that. Thinking about what that means, what I want to demonstrate, and how I hope to grow in the process of preparing – both in my technique as as a person. Meanwhile, we have a group of high-level exams coming up next month, so training has been getting more intense. Ukemi is a big area of development for me, and there will be plenty of opportunities to work on that!

Off now to meet a writing friend for a late lunch, then to the dojo for Sensei’s monthly-ish Exam Technique Workshop, and dinner with dojo friends who are visiting from out of town. Tomorrow is class in the morning (I’m not teaching that one), more training with dojo friends, and then assisting in two children’s classes run by a dojo-mate for kids from his church and other local churches. Sunday is working with a friend/fitness client, and then two hours of open mat.  And that’s pretty much how things go. Loving every minute.

From Aikido to Zanshin - 26 Essays on the Martial Art of Peace. This series will soon be available as a book, both in print and for Kindle, too!

From Aikido to Zanshin is for anyone with even a casual interest in Aikido. I invite you to read and share with friends.

Wish you could do martial arts, dance, hiking, kayaking, or whatever, but don't feel ready?

I offer fitness coaching, programs, and classes in San Diego and East County for people who want to get moving and keep moving on the path to a more fun, healthy, active life.