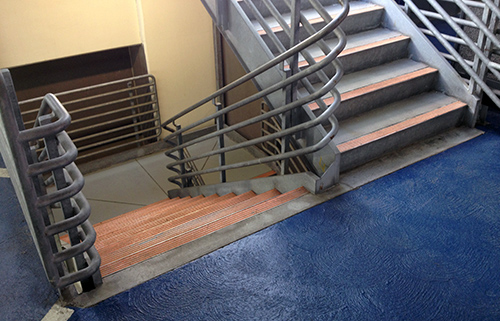 I went into the office for a few hours yesterday – something I hadn’t done yet this whole year, as I work off site now. It was a crisp, sunny fall afternoon, and was excited about seeing my friends there. A quick visit, checking out a new tool I’d be using on the cool project I’m working on, catching up with a few colleagues, and then I’d be heading to the dojo to assist in the kids’ class and train in the two evening classes. The makings of a pretty awesome day.

I parked in the usual garage, on the 5th level, and headed for the stairs down to the street. When I saw them I was struck by something I hadn’t thought about in years. I stopped and stood there so long, just looking, that the security guard came over to see if everything was OK.

It’s funny the things that you forget.

When I first started training I could not climb these stairs, not up or down. My knees couldn’t take it. Every day I had to detour and take the elevator. I could do a few steps. But whole flights of stairs, no. The pain behind my kneecaps just wouldn’t let me. It’s been so long ago, so much has changed, I’d forgotten it completely.

There was so much wrong, back then. I had the knee pain, of course, and shoulder problems that had required surgery and ongoing PT. Plantar fasciitis meant I had to wear heavy hiking shoes with orthotics, and even with them I couldn’t walk far. Every morning I woke up stiff and sore, like I’d been sleeping on cold concrete. I had constant vertigo that felt like I was living aboard a ship, complete with seasickness during particular high seas. And neuropathic pain that would have sent me to the E.R. at times, except that I knew there’s nothing they could’ve done for it.

I felt old and weak and broken. But I wanted become a better horseperson – more centered, less reactive – and I knew Aikido could help. I called and asked Sensei about classes that didn’t involve rolling or falling – I didn’t know if I’d be able to. “Nope. We all train together. Come in, and just do what you can.” I didn’t even consider the link between Aikido and health – the possibility of actually improving one’s health. But I was cautiously optimistic, and buoyed by his confidence I decided to give it a try. I dragged my busted up self into the dojo and started training.

My life has a soundtrack. Somehow the right song seems to come along when I need it. Last week I got to see the brilliant songwriter Cheryl Wheeler in concert. As I was listening to her music on the way home that night I rediscovered this gem, “Boulder Hotel Room”:

Life is short, but the days and nights are long
Time will heal all these wounds
Some day soon
I’ll be rising I’ll be strong

When I first started training I loved this song for its powerful little flickers of hope and determination. I listened to it over and over, back then. I’d forgotten all about it, too.

Shortly after I started training I injured my shoulder. It occurred to me I might have made a mistake, trying to take up a martial art at my age and with my collection of ailments. Soon after, it appeared that my neuropathy might be causing new and more dangerous autonomic nervous system problems. I was worried about what was wrong with me. I thought it might be MS. Whatever it was I was scared to death that it would get worse. But I’d already been drawn into Aikido – waking up in the mornings excited about getting to the dojo, smiling about nothing on the way home from class. Come what may I wasn’t going to give it up.

It turns out the worrisome symptoms – near-fainting and seeming inability to regulate body temperature – had a perfectly harmless explanation. I don’t think my doctor has ever had a patient react with such relief and happiness to discover that she’s run headlong into menopause!

But there weren’t only physical problems. In recently years I’d lost my sister to addiction, several friends suddenly to various health issues, and my first horse to colic. The equestrian community I’d been part of for years unraveled as members focused on recovering from a fire that affected thousands in our area. At the same time work went straight to hell, with a sadistic boss seemingly bent on ruining my career, and I had to quit that job. The 9/11 attacks and hurricane Katrina provided a fitting background. It was a painful time, and when I started training these things still had a strong hold on me.

Broken hearts keep on beating just the same
So I guess I can too
Go through these moves
Facing forward, walking straight

You know how years later you can clearly remember words that shocked your system? Someone says something so unexpected, so direct, so true that it pierces right through the usual listening we have for small-talk and ordinary communication. Like a time decades ago – maybe I was in my early 20s – in a supermarket… I was standing in the path of a woman’s cart and as I stepped aside I said “Oh, I’m sorry.” Instead of the usual “no problem” kind of civility she snapped at me sternly, but not without kindness, “Don’t apologize. Women are always apologizing. Don’t do that.” It came from out of the blue – a little verbal dope-slap – that it really caught my attention, and made me think. She was right. I took her advice to heart, and try to follow it to this day.

Anyway…I was training one day, and I don’t know what I said – probably something about how that particular technique was really hard for me, you know, with my shoulders, or how badly I was doing it – when Sensei snapped at me in the same way, not out of meanness, but so direct and piercing that really caught my attention: “Stop wallowing in your own misery!” Whoa… I hadn’t realized it, but I really was. For sure I had some problems, but I was turning circumstances into misery; I was the one doing the wallowing. I hadn’t been aware of that. I took Sensei’s words to heart, trying to catch myself when I’m inclined to revert to that way of being. The world is a brighter place when you’re not wallowing in misery, it really is.

I know there’s light on some horizon
But I can’t see so far ahead
Patience and grace, blessed is love
I’m losing my faith
In most of that stuff those wise men said

Sure, I figured that he knew what he was doing as far as technique, and could teach it well. I assumed I’d be challenged with faster, harder attacks as I became better able to handle them. I thought I’d learn to stay calm and deal more effectively with scary, painful reality.

I didn’t hope circumstances would improve. I never imagined that I would be challenged to change my reality. I didn’t even know that was an option. I couldn’t see that far ahead.

Now that old reality is only a distant, faded memory. It comes back to me, infrequently, in dream-like flashes – like when I’m stopped in my tracks at the sight of a stairwell, realizing I’m about to jog down 5 flights in light, flexible flats and a skirt, excited about the beautiful day ahead of me, like it’s the most natural, normal thing in the the world. And now it is.

Thank you for that, Sensei.

Lyrics above are quoted from “But the Days and Nights Are Long” (AKA: “Boulder Hotel Room”) by Cheryl Wheeler