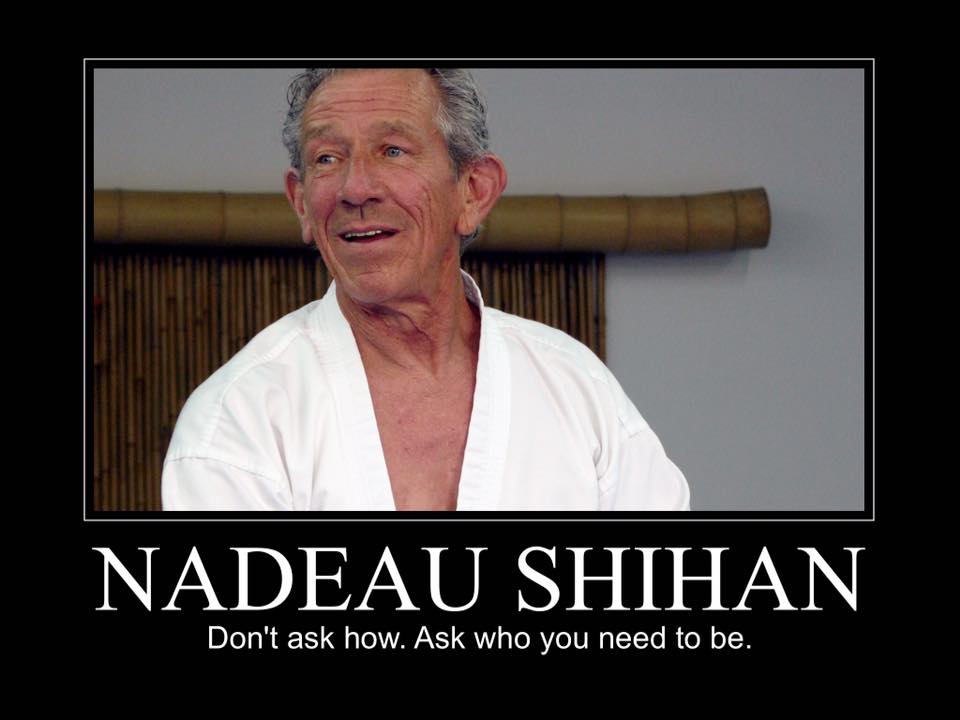 Last month I wrote a series of 26 posts, Aikido from A to Z, one for each letter of the alphabet, as part of the Blogging from A to Z Challenge, April 2016.  It was, indeed, a challenge, writing 4-6 hours on most days.

Also during April I participated, for the 4th time, in the annual 3-day “O Sensei Revisited” retreat, lead by Robert Nadeau Shihan. He is my teacher’s teacher – a huge influence on my Aikido and my life, both through my teacher, and directly. Nadeau Shihan uses Aikido to show us how we can arrive at better, bigger, “finer” levels of ourselves, in whatever we are up to, not just on the mat, doing techniques.

One of his teachings that particularly resonates with me is something he said a few years ago, during a seminar at our dojo, and which has hung above my desk ever since:

“Don’t ask how to do this. Ask who you need to be where this is possible.”

April’s A-to-Z challenge was an opportunity to put this into action. I put it out there that I was committing to a post a day, and had to be a person who was doing exactly that. I declared myself to be a consistent writer, someone who does quality work and hits deadlines. And then I had to be that. The doing – how to go about it – was secondary to simply being a person who writes solid material every day, on time. I skipped zero days, even the days where I was out of town – I wrote those by doubling up the previous week. There were a lot of very late nights, often writing until 3 or 4 a.m., but I had a post up on my site before going to bed every night, all month.

It was a rewarding month. I have some catching up to do in other areas of life, like getting my oil changed, and putting away my laundry, but I’m proud of the work I’ve done.

I’m grateful for the support of so many Aikido friends and others, for their encouragement and kind words, and for sharing this series. I hope these posts ignite some interest and action among readers, and that at least a few folks will find their way to a dojo, or will see some new possibility for themselves.

I learned a lot, both about the subject, Aikido, and about the process of writing. I found great new friends in a group of local writers – Laura, Kristen, and Natalie – as we all participated in the challenge together (at Laura’s invitation, actually). Now we’re going to continue supporting each other with regular meetings and ongoing online discussion.

The next step, which I will be doing during May, is to create and publish a book using this work as a starting point.

And to keep writing.